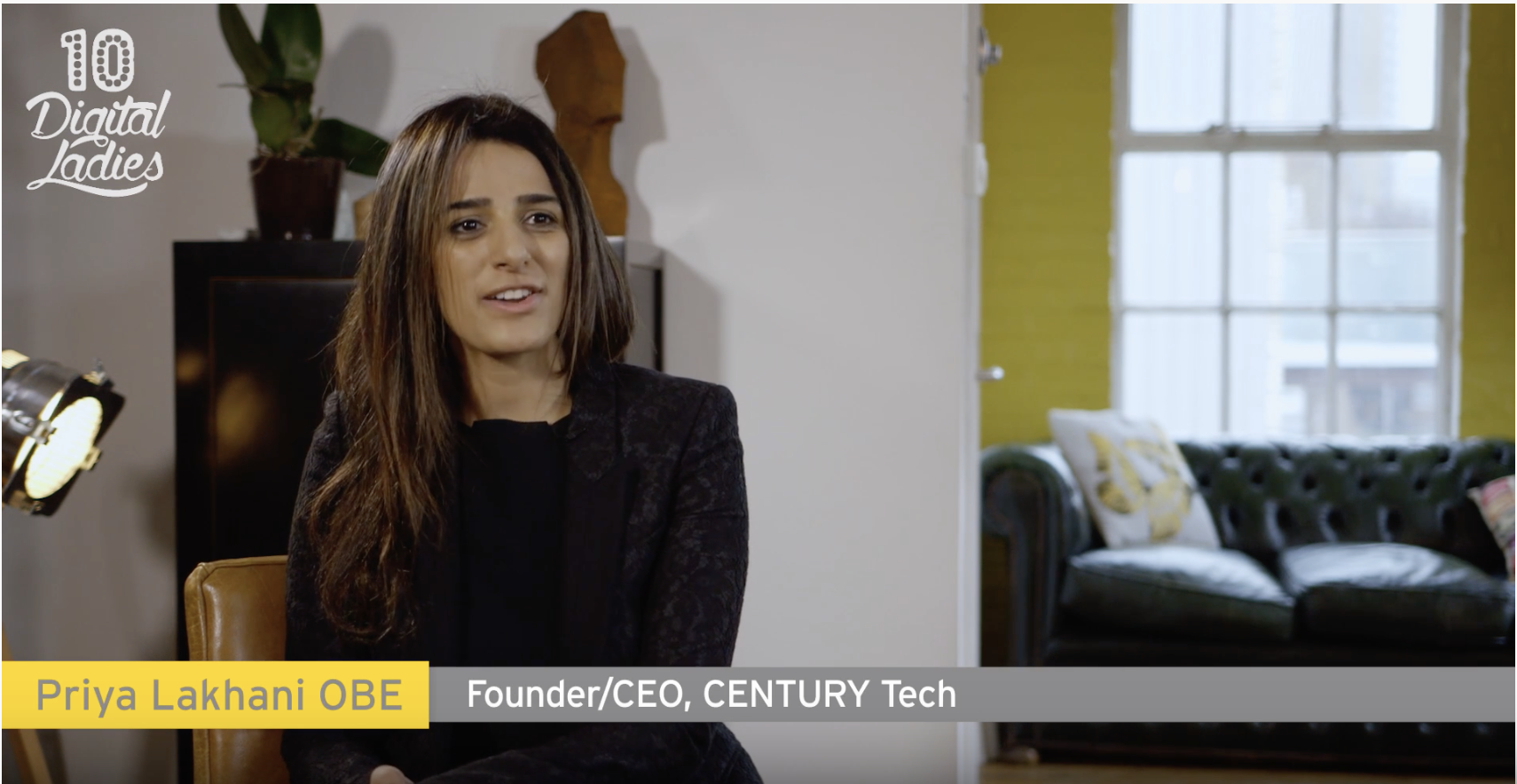 March 8th 2020 is International Women’s Day and by way of celebration I decided to publish an article a day from March 2nd – 8th on some of the women who inspire me the most. Day 1 focuses on entrepreneur Priya Lakhani OBE. See the full list of inspiring women here.

The business was a huge success and Priya joined Vince Cable’s advisory board at the Department of Business, Innovation and Skills where her passion for accessible education for all was fuelled.

Over the years she has won several awards for entrepreneurship and was awarded Officer of the Order of the British Empire in 2014.

Back in 2016 I was part of the amazing team behind 10 Digital Ladies, a London-based not-for-profit organisation with the mission to inspire women pursuing careers within the digital sector.

It was in this role I got to meet and interview inspiring entrepreneur Priya Lakhani OBE whose drive and passion for making the world a better place through business left a lasting impression on me.

Below are some of the key messages I took from speaking to Priya in 2016, the quotes used are from the same 2016 interview.

ONLY YOU ARE RESPONSIBLE FOR YOUR DREAMS

If a single person could be the human antithesis to Imposter Syndrome, Priya would be it. Her incredible and unwavering passion compels her to confront seemingly impossible tasks between her and her goals and quite simply decimate them.

For me, she incites equal parts excitement and terror because the more you listen to her the more you find yourself questioning the validity of your own excuses and realising that they really don’t amount to much.

It’s exhilarating to think that you really could achieve anything you put your mind to… and a little scary.

Priya puts it pretty simply, ““Three billion people want jobs, 1.3 billion have jobs, and 87% of those that have jobs are not engaged with what they do. Be one of the 13% – let us have purpose…. get up in the morning and have drive!”.

Priya’s energy invites you to step into your own power; how you RSVP though is up to you…

Priya began her career as a barrister and practiced for four years. She then quit her job and started a food company, Masala Masala. Initially she was told, “Is your brother or sister a buyer at Tesco? You’re never going to get into supermarkets”. She had nationwide supermarket deals six weeks later.

BE DRIVEN BY THE LEGACY YOU WANT TO LEAVE BEHIND

She keeps pushing when others would quit by using a visualisation technique she calls “putting a picture in my museum”. She focuses on walking through the museum of her life and looking at the legacy she will leave behind; each picture hanging on the wall is a key achievement. When faced with an obstacle she thinks, “You will not get in my way from putting a picture in my museum,”.

Her legacy with Masala Masala was more than an impressive food business, she also fed a homeless person in India or Africa a hot meal for every pot of sauce sold in retailers – reaching a total of around 3 million meals and 35,000 vaccines.

Talking in 2016 about the inspiration behind her businesses she said, “I’ve generally approached all of my ideas, from ‘here’s a problem in the market’ or ‘here’s something that I’ve come across and how can I fix it?’

As an example, say the food company. I was working late nights as a lawyer and I wanted to cook really healthy food, but I found that the only fresh sources on the supermarket shelf were pasta sources. And I thought, where are the ethnic sauces? I’m going to build that company.

With CENTURY, I understood that there was a huge issue in education. 1.8 million children in this country are under performing in UK schools and that’s a huge problem. So having dug a little bit deeper and done some research, I then wanted to find a solution to that problem and how we can leverage the best of technology that is now available in pretty much every other sector in the world and how we can then leverage that and apply it to education.”

Now in many schools around the globe, CENTURY combines the latest research in learning science, artificial intelligence and neuroscience to provide tools to improve learning outcomes for students and support to teachers. It’s developed by an award-winning team of experienced teachers, neuroscientists and technologists and Priya told me back in 2016 the importance of getting the right team behind an idea. She said that she wrote down her company culture early on to ensure that she only employed people who were also driven by her passion and shared in her vision. “If you are able to tell your personal story and why you do what you do, you are able to attract talent,” she said at the time.

If you would like to nominate a female entrepreneur to feature in the Inspiring Women Series please get in touch.

Would you like help putting together a business strategy?

Tired of getting in your own way?

Coaching could be the key to help move you from where you are, to where you want to be.